Insects have six legs and most have wings. They were also the first animal capable of flight. In our sights at home most consumers get the raid out and go for the kill. Yet this small arthropod animal may become the next emerging food group phenomenon. For instance, crickets are often trumpeted as the future of food, an edible, eco-friendly solution to a some-day protein shortage. Welcome to Insect Protein – Foods Next Protein Source!

The increase in the world population, the importance of alternative feeds, and the decrease in cropland is what is being described as the driver behind the insect protein market. Nutrient-rich is an element that attracts consumers to insects. Mr. Arun Nirmal with Singapore based research firm Arcluster in conversation with Feed Navigator said:

“It (insect feed) is going to be a big part of the market. Insect feed could account for up to 3% of the global feed market over the next four years”. [1]

The Global Insect Protein Market is estimated to reach USD 1.3 Billion by 2023, at a compounded annual growth rate (CAGR) of 110.2%.[2]  In the US, the insect protein market was estimated at $33M in 2015. The products in this sector generating the most demand and sales are[3] 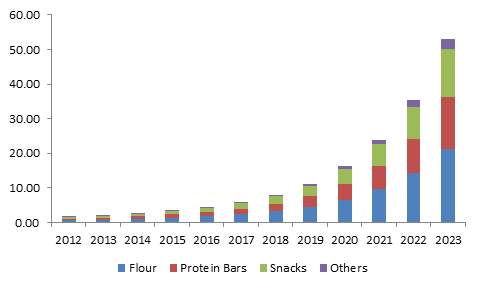 Consumers demand nutritional foods. This is one of the reasons why people are attracted to insects. They are considered highly nutritional; the majority of them are rich in protein, healthy fats, iron, and calcium and low in carbohydrates. In fact, researchers claim that insects are just as – if not more – nutritious than commonly consumed meats, such as beef. Crickets contain 2x more protein content than beef and 1.6x more calcium than milk.[5] They are a superfood.

Eating insects are hard for many to fathom. So, what consumer demographic is embracing this new food?

Is the insect protein market a fad or a trend? It is hard to say. A friend in the industry mirrored insect food to that of the gluten-free market. Once considered a fad, globally, gluten-free sales topped $4.6B in 2015, 92% higher than they were in 2005. So, if you don’t want to eat insects, do not eat insects. However, the Food and Agriculture Organization of the United Nations (FAO) predicts the world population to increase by three billion people by 2050. If we are to feed a plant responsibly, can we honestly do it with animals alone? Eventually, we will require another source of protein and we need all the tools at our disposal, including insects.