Cannabis, also known as marijuana among other names, is a psychoactive drug from the Cannabis plant used for medical or recreational purposes.  Doctors have prescribed marijuana as a treatment for pain. They also may prescribe medical marijuana to treat: 1. Muscle spasms caused by multiple sclerosis, 2. Nausea from cancer chemotherapy, 3. Poor appetite and weight loss caused by chronic illness, such as HIV, or nerve pain, 4. Seizure disorders and, 5. Crohn’s disease. This past week Canada become just the second country in the world, and the first G7 nation to legalize marijuana for recreational purposes. With this legislation and up-coming legislation, business seeks to infuse cannabis in food and beverages. Just this past month, BNN Bloomberg revealed The Coca-Cola Co. was in serious talks with Aurora Cannabis Inc. to develop cannabis-infused beverages, a groundbreaking move that would signal a significant foray into the marijuana sector by one of the world’s most iconic consumer brands. 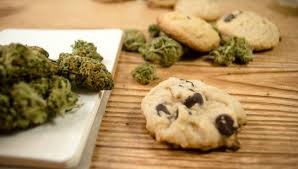 Though the Canadian Governments Bill C-45 does not include edibles and other cannabis-infused food products, they have revealed that it might take longer for the regulations surrounding the legalization of cannabis-infused products to come through, with specific government regulations rolling out in 2019 at the earliest. Canadians are open to trying cannabis edibles. A 2017 study by Dalhousie University disclosed that 46% of Canadians said they would try cannabis-infused food products such as baked goods, oils and spices if they became available on the market, and 39% would be willing to try it in a restaurant.[i] Only 20% said they feel knowledgeable enough to try making marijuana-infused foods at home. As part of the same study, 50% of food companies in Canada indicated they are uncertain about their position regarding cannabis with many companies worried about how cannabis will affect their brands or their supply chain strategy.

Though edibles present a profitable opportunity for the Canadian food industry, no one knows what the market potential is. In California, consumers purchased US$180 million worth of cannabis-infused food and drink in 2017. In Colorado, where cannabis is also legal, sales of edibles rose by about 60% a year over the past two years. As noted by food pundits, “Quite simply, this is a potential phenomenon akin to what the industry saw with sales of gluten-free products”.[ii]

In 2018, Deloitte undertook a study of the cannabis market. As part of this study, they broke down the cannabis user as “The Current” vs “Likely User”. Their current user is between 18-34 years old with a maximum high school or college education. Their likely user is between the ages of 35-54 years old with a university or graduate school education. For a summary of Deloitte’s research findings, google https://www2.deloitte.com/content/dam/Deloitte/ca/Documents/consulting/ca-cannabis-2018-report-en.PDF.

As part of their study, Deloitte revealed Canadians have a strong appetite for edibles with six out of 10 likely cannabis customers will choose to consume edible products. Chart 1 provides an overview of potential cannabis-based edible products.

Many including Sylvain Charlebois – Professor in food distribution and policy, faculties of management and agriculture at Dalhousie University await the legalization of edible cannabis in food. To that, many industry experts agree food and drink made with cannabinoids still have a host of obstacles to overcome before breaking into mainstream. When it comes legal it will be interesting to see how branding strategies will align with cannabis. Beyond the psychoactive effects of cannabis, there is also the possibility of pitching it as a superfood given the cannabis plant is full of nutritional value, including, calcium, iron, zinc, vitamins E and C and many other elements considered beneficial for human health. When cannabis edibles come legal, Health Canada will have to create an appropriate regulatory framework, as many questions still linger about the distinct dangers’ edibles pose, particularly for children.

[i] With Cannabis-Infused Food Products, the Road to Legalization Has Been Complicated, www.thegrowthop.com, August 2018

[ii] Getting Cannabis Edibles to Consumers Will be Complicated, www.leaderpost.com, July 2018

[iii] A Society in Transition, an Industry Ready to Bloom, www.2deloitte.com., 2018