GROCERY WARS: THE EMERGENCE OF THE ETHNIC SHOPPER

Canada is recognized as being the most cultural diverse society of any Western country. Yet, despite ethnic consumers being identified as a segment, brands must embrace to sustain growth in the CPG sector, a Nielsen study revealed “Most Canadian companies either don’t have (36%) or don’t know (27%) of any objectives or goals tied directly to any particular group”. So, what is the make-up of the new Canada, what impact will this segment have on CPG spending, where are they shopping and how best to engage with them?

The old Canada (white, rural focus society) is giving way to the new Canada (urban-suburban, multicultural society). By the end of 2011, Canada had a foreign-born population of 20.6%, with 59% of Canada’s immigrants coming from Asia

including the Middle East. Europe was the second region of birth for immigrants coming into Canada, accounting for 16% of all immigrants. It is estimated by 2030, 30% of the Canadian population will be foreign born. Toronto and Vancouver represents Canada’s most multicultural cities:

Over the next ten years Canada’s population is expected to grow by around 7-8 million consumers, with close to 60% of this increase attributed to immigration.

Ethnic Spending in the CPG Sector!

From 2008 to 2013, visible ethnic groups far outpaced the average non-visible resident in consumer spending as outlined in Table 1. In fact, it is estimated over the next decade some $12B in additional grocery store sales will be attributed to immigrants. 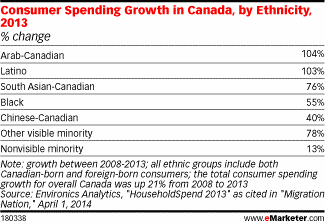 In a study undertaken by Loyalty One, entitled The Modern Grocery Shopper: Attitudes and Opinions Survey, nearly 9 out of 10 ethnic Canadian grocery shoppers indicated the selection of ethnic food and ingredients is an important feature in choosing which grocery stores to shop at. Yet as part of the same study:

In fact, most ethnic shoppers seek out local stores operated by their own ethnic group, rather than shop at a local supermarket. This gives rise to the increase in grocery sales through ethnic supermarkets. Though difficult to judge, Mr. P. Caicco of CIBC World Markets estimate sales at between $4B and $5B per year while Mr. B.K. Sethi of BK Sethi Marketing figures sales are between $2B and $3B annually. Whatever the actual number is, it represents substantial sales loss for conventional food stores.

Engaging with the Ethnic Consumer!

The Impact for Small Business!

Visible ethnic groups are impacting grocery sales in Canada. Over the next 10 years, period ending 2023, about 70% of the growth in Canadian consumer spending will come from visible minorities.The choice is simple. Ignore this segment at your own risk or embrace them to reap unprecedented growth opportunities. The key is to research this segment, understand what motivates them and engage with them in dialogue. Do not rely on traditional marketing efforts. Embrace social media and identify the influencers for this segment. A recent study undertaken by influencer marketing platform MuseFind revealed 92% of consumers trust an influencer more than an advertisement.The power of influencers does not necessarily lie in their follower count, but in their ability to actually influence through authenticity and curation.